There may be no better measuring stick for an attorney than the opinions of their peers. The same is true for medical illustrators.

During the Association of Medical Illustrators (AMI) Annual Conference, each year a judged illustration competition is held. One of the largest and most competitive categories is the Medical-Legal category. Unlike most art competitions, the illustrations are not judged primarily on aesthetics. Instead, the most important criteria are anatomical accuracy and how effective the visuals are in communicating a stated message to the jury.

At the recent 2010 Conference in Portland, Oregon, the illustrations in the medical-legal category were particularly strong, resulting in the presentation of two Awards of Excellence (the highest honor) and four Awards of Merit. Illustrators with MediVisuals of Richmond, Virginia and Dallas, Texas were honored with both the Awards of Excellence and three of the four Awards of Merit. The various award winning illustrations can be seen by clicking the following link: http://www.medivisuals.com/awards.aspx.

The Award of Excellence in Medical Legal Illustration is particularly significant because this Award has only been bestowed 23 times in the 75 year history of the AMI. With this year’s Awards, MediVisuals has now received 18 of the 23.

MediVisuals was also honored with an Award for a medical-legal animation entitled "Cascade Effect of Axonal Loss". The animation was developed for use in all "mild" TBI cases and helps explain how injury to even one axon can interfere with the ability of several neurons to communicate with each other. The animation can be viewed using the following link or clicking the image below: Cascade Effect of Single Axon Loss Animation

For more information on MediVisuals or to receive a complimentary consultation on an upcoming case, please visit www.medivisuals.com 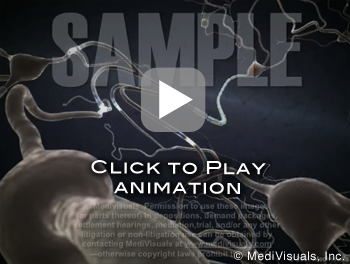